Exploring the PSD2 landscape in Finland

This article was first published in LinkedIn on May 28, 2018

Early in May 2018 I ran across a Reuters story about HSBC publishing a multi-bank app in the UK. It caught my eye since it was not about a glossy new fintech startup leveraging PSD2 but rather about one of the biggest players taking the game to a whole new level. On May 16 there was an almost identical press release (sorry, Finnish only) from Danske Bank, stating that they will release the first multi-bank app in Finland in June 2018. This Finnish-only press release was related to Danske Bank's announcement about investing in Spiir, a Danish fintech startup, whose Nordic API Gateway product obviously powers the operation.

A related piece of news from about six months to the past was Nordea's announcement about partnering with (and investing in) Tink, a Swedish fintech known for its banking aggregator app, and recently also an Open Banking API provider. Nordea's announcement was not directly about releasing a multi-bank solution (rather embedding some Tink features into Nordea's own Mobile Bank app), but it would not be totally outlandish to extrapolate towards that direction.

Finally, OP Financial Group has been out with its Pivo service already for a couple of years. Pivo is technically a multi-bank app in the sense that you can take it into use without opening an account in OP bank, but will only work as P2P payment service with some loyalty program features for non-OP customers. OP account owners will get a lot more from the app.

I have been following the Finnish Open Banking scene loosely during past year or so, and these stories gave me inspiration to take a more close-up look at what's the situation in Finland at the present - we are four months into the PSD2 national legislation era already anyway.

I've restricted this list to banks that are domiciled in Finland - with the exception for Nordea, which is in the process of moving its headquarters to Finland later this year, and Danske Bank, which has a significant customer base in Finland through Sampo Bank (member of Danske Bank Group since 2007, and known as Danske Bank in Finland since 2012).

The information in this article is collected from public sources that are linked in the text. In addition to that, I have been in contact with different banks' customer support to gather an overall picture of the PSD2 APIs availability for developers in Finland.

OP is the biggest bank sector player in Finland by the number of customers. Their Developer portal at https://op-developer.fi has been open for registration from early 2018. First round in Open Banking Startup Partnership Program started in February, and program schedule indicates that we should be seeing some go-to-market actions from the partnership program towards the end of Q2 this year.

Nordea has the second biggest share of the market in Finland, and over 10 million customers in the Nordics, which makes it very interesting from developer perspective. Nordea's developer portal at https://developer.nordeaopenbanking.com/ opened for early access registration already in early 2017 and was extended for everyone towards the end of 2017.

Gunnar Berger, the head of Open Banking at Nordea, gave a presentation at Nordic APIs conference with the title Closing the Gap to Future with Open Banking. One of the key messages in this presentation is that Nordea targets to become a hub for all sorts of banking innovations with its Open API portal - not only for developers, but also for the end users. Nordea has also a closed pilot program running from which I expect to see first graduates coming out later this year.

Danske Bank has an open banking program early access signup page at https://danskebank.com/openbanking but there is no open developer portal at the time of writing this.

These banks do not have information about a developer program or open banking initiatives available on their websites, but most of them confirmed upon request that they are working on it, and developer portals will be opened by September 2019 as the regulation expects, if possible sooner than that.

Finland - the Land of a Thousand Rules

Finland is known to be culturally quite rule-oriented country, and the banking makes no difference here. The Finnish law related to payment institutions has historically been a bit more strict than the EU regulation. One good example of this is the stance towards screen scraping which has always been illegal in Finland when it comes to end users' bank account information. The EBA RTS will apply the ban of screen scraping throughout the union, but that is only going to be in force from September 2019 on. In this transition period I think we will probably see aggregate services emerge in Finland through initiatives led by banks, like the aforementioned Danske Bank solution.

PSD2 has brought us a promise of more colourful set of financial services by mandating banks to open new interfaces towards third party developers. When I did my inquiry to various banks mentioned above, some stated that they have been working with selected startups and other business partners already for several years, only through proprietary developer programs instead of open APIs. PSD2 is presented as a game-changer as it empowers the financial application developing companies to work on their product ideas with open and non-restricted access towards any bank in the EU.

Regardless of the good intentions behind PSD2, I don't expect an immediate growth expansion in the number of independent fintechs even after Q3/2019. The regulatory harness is just too heavy to thrive spontaneous innovation in volumes that we see around open APIs in less regulated business areas. Based on Nordea's and OP Groups own press releases and blog posts the overall number of applications registered in their open API portals is counted in thousands, but there are no new registrations by companies or individuals for becoming an official PSD2 AIS/PIS provider in the Finnish FSA's supervised entities list. Registration is mandatory to gain access to live account information through the open banking interfaces. FSA PSD2 monitoring group meeting notes indicate however that there has been a number of inquiries about registration on their Innovation HelpDesk.

Are you a PSD2 developer?

Maybe you're working on a killer app on top of Open Banking interfaces, or member of a bank's API development team? It would be interesting to hear comments and opinions coming from someone who has some first hand experiences. I have been working on a small financials visualisation application myself just to get familiar with Nordea and OP API offering, more on that later in a separate post 😉

Where to find more information

Finanssivalvonta (Financial Supervisory Authority) is the authority for Finland's financial and insurance sectors. FSA has a PSD2 monitoring group that discuss interpretation issues and give guidance and advice to supervised entities. Finnish-only meeting notes are publicly available.

NextGenPSD2 is Berlin Group's initiative to build a API standard for accessing AIS/PIS services. Their latest publication is from May 11, and it documents implementation guidelines for building PSD2 compliant XSA2 interfaces. As it is very fresh, don't expect the sandbox APIs provided by different banks to quite match this yet.

Open Banking Ltd. it is worth noticing that UK has led its own way with payments and banking API standardization with a joint organisation of nine largest banks in the UK and Ireland that was started in 2016. Thus they're a couple of years ahead of EU in the implementation of Open Banking standards. As a result of this head start, there are already a number of regulated providers operating in the market.

OpenBankingAPIs.io service lists a number of banks all around the world with pointers to their Open Banking interfaces. The list appears to have a slight UK bias, and even though e.g. Nordea's Developer Portal is listed under Sweden there, the catalog does not have any entries for Finland at the time of writing. Interesting source of information though, if your perspective is towards multi-national business around open banking.

Boogie Software Oy is a private Finnish company headquartered in Oulu, Finland. Our unique company profile builds upon top level software competence, entrepreneurial spirit and humane work ethics. The key to our success is close co-operation with the most demanding customers, understanding their business and providing accurate software solutions for complex problems.

Building a light-weight Kubernetes cluster with Raspberry Pi and k3s

Here at Boogie Software , our experts are using Kubernetes and container technology every day in several projects, and thus, we were quite intrigued to find out how Kubernetes works on-premises with more modest hardware. In this post, I will describe how we built a light-weight bare metal cluster on Raspberry Pi boards for running applications and services in our company network. There were really two reasons for doing this project. Firstly, by setting up the cluster we get a platform where we can reliably and flexibly run our company network internal apps and services. Secondly, this was a nice opportunity to learn more about Kubernetes technology, microservices and containerisation. For those who are interested in following these steps or building a similar system, it is recommended to have at least a basic knowledge about Docker containers, Kubernetes concepts (nodes, pods, services, deployments etc.) and IP networking. Hardware setup What you would need for this kind of

Flutter is a mobile application development framework designed for creating applications for both iOS and Android with a single codebase. It was created and is being developed by Google and the Flutter community. The first version of Flutter was released in May 2017 and the 1.0 version on December 4 th , 2018. In the time of writing this article, the current stable version is 1.9. Flutter applications are written in Dart programming language. For platform-specific code Flutter provides support for both Kotlin and Swift. 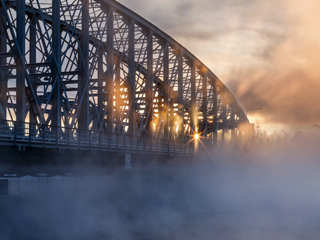 I spent the summer of 2019 as a Data Analyst trainee at Boogie Software . Part of my work was to implement a small project utilizing neural networks to solve an interesting problem of my own choosing. I have experience in portfolio performance analysis, so I immediately thought of stock market data. More precisely, predicting stock returns with neural networks.  Boogie Software has strong expertise in financial technology, so the topic fits nicely to the company profile and the whole AI team was eager to contribute to the work. Predicting future stock returns has always been a popular topic. Reasonable estimates of expected returns are useful in many financial asset pricing models. Most investors would like to be able to pick the future winning stocks into their portfolio. Predicting stock returns is not easy, but the development of machine learning models provides new possibilities in the field of empirical asset pricing. In this work, we use an artificial neural network model